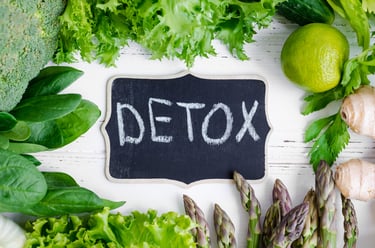 The word “detoxification” can trigger a lot of negative responses from people. When we think “detox,” we think discomfort or something we are afraid to do. Everyone has a friend who has some kind of detox story, and fears range from, “Will I be starving?” to “Will I be in the bathroom all day?” Detox has become a dirty word because we don’t really understand what it is.

Truth be told, our bodies are designed to naturally detox; we do it every single day without even thinking about it. A built-in garbage disposal, detoxification is the cleaning system that enables us to discard foreign, unwanted, non-nutritive or chemical substances, referred to sometimes as “xenobiotics” or foreign particles. And, lately, we have an onslaught of xenobiotics entering our food supply, poisoning our lakes and rivers, finding their way into cookware and clothing, and even manufactured from our own overburdened metabolic processes (i.e., insulin and uric acid are natural metabolites). With toxin buildup associated with a number of chronic health issues including cardiovascular disease, diabetes, autoimmune disease, neurological diseases, reproductive disease and infertility, ADD/ADHD/Autism and, also, depression and anxiety, we not only need to understand our natural detoxification ability, we need to maximize it.

The detox process happens, basically, in two phases called phase I and phase II, with the combined purpose of converting the fat-soluble toxins into water-soluble compounds that can then be excreted by the body. In phase I, a set of enzymes called cytochrome P450 enzymes (CYPs) are responsible for the oxidative metabolism of the toxins. These enzymes, of which 57 have been identified, transform the toxins into a water-soluble form that can then be metabolized by the phase II enzymes, and ultimately excreted. CYPs, located in the liver and the intestines, are non-specific and recognize countless toxins. They are responsible for the majority of phase I drug metabolism reactions, which is why they are so well-researched. Several other enzymes, including flavin monooxygenases (FMOs), alcohol and aldehyde dehydrogenases, and monoamine oxidases (MAOs), also contribute to phase I detoxification when faced with nicotine, alcohol and antidepressant drugs, respectively.

In phase II reactions, the toxins are conjugated into water-soluble substances, which increases their solubility and enhances secretion. Some of the phase II enzymes include UDP-glucuronlytransferases (UGTs), which catalyze some clinical drugs and environmental toxins, glutathione-S-transferases (GSTs), and sulfotransferases (SULTs). Each catalyzes a different type of conjugation reaction. In summary, phase I converts the toxin into a water-soluble compound and phase II helps conjugate the compound, preparing it for excretion.

Ideally, phase I and phase II enzymatic processes are functioning optimally, and we are successful in eliminating these unwanted substances. Sometimes, however, our bodies are not equipped to detoxify the toxins. A nutrient deficiency can make detoxification difficult because vitamins and minerals act as cofactors in the enzymatic pathways of phase I and phase II. In one study, the detoxification of a common toxin, Bisphenol A, was found to be dependent on retinoids (natural derivatives and synthetic analogs of vitamin A). The enzymatic activity necessary to eliminate BPA required retinoid stores in the liver, and the extent of the damage from BPA toxicity was affected by retinoid administration and liver stores of vitamin A.

In addition to nutrient deficiencies, some people have genetic polymorphisms that make detoxification more challenging or simply a deluge of toxins in the system, rendering it impossible for their bodies to manage.

Take, for example, a popular pain reliever’s active ingredient, acetaminophen (paracetamol). The most common cause of liver toxicity in the U.S. is caused by acetaminophen toxicity due to what has been identified as a phase I/phase II imbalance. Ideally, most of this drug is detoxified by phase II UGT and SULT enzymes. A small portion of it, however, is first transformed into a toxic metabolite, N-acetyl-p-benzoquinoneimine (NAPQI) by phase I CYP enzymes, and is then conjugated with glutathione using GST during phase II. In cases of toxicity, what can happen is that the system gets overwhelmed and the UGT and SULT enzyme activity gets impaired. This forces the drug to undergo the mechanism whereby it first gets converted into NAPQI and then uses glutathione for conjugation. Eventually the glutathione stores get depleted, and the rising levels of NAPQI in the liver cause widespread damage.

To counteract the rising level of NAPQI, glutathione or N-acetyl-cysteine, a precursor to glutathione, is often administered after an acetaminophen overdose. So much success was found in the administration of NAC to reverse the hepatotoxicity from acetaminophen that NAC is now being used to reverse non-acetaminophen liver failure.

Our bodies have natural intelligence, and can handle the occasional xenobiotic entering the body. However, when much of what we eat, drink and breathe is laced with non-nutritive substances, our bodies need additional nutritional support to bolster our natural detoxification pathways, phase I and phase II.

END_OF_DOCUMENT_TOKEN_TO_BE_REPLACED

Detoxing the Brain: Sleep and Glymphatics

According to the Natural Resources Defense Council (NRDC), there are over 85,000 synthetic chemicals in circulation toda...