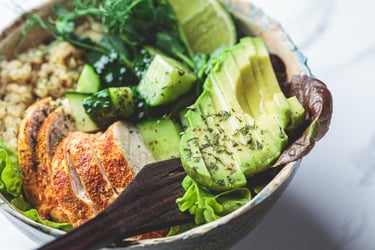 In addition to the well-known role of ketogenic diets for facilitating weight loss and improving type 2 diabetes and metabolic syndrome, this very-low-carbohydrate way of eating is also recognized for being useful for a number of conditions for which there few or even no other treatments. One such condition is glycogen storage disease.

There are several different types of glycogen storage diseases (GSD), each one caused by a defect or deficiency in a different enzyme in the synthesis, storage, or breakdown of glycogen. As a result, individuals affected by these may have difficulty using carbohydrate (glucose) to fuel not just exercise and other physical activity.

Examples of GSD include GSD 0, which is characterized by a deficiency of glycogen synthase, resulting in a reduced capacity to form glycogen in either the muscles or the liver. Some of the other GSDs are related to accessing or breaking down glycogen. GSD III is caused by reduced activity of a glycogen debranching enzyme; GSD IX results from deficiency of phosphorylase kinase, a key regulatory enzyme for glycogenolysis. Research suggests that ketogenic diets may be helpful for various forms of GSD. McArdle disease (GSD V) is one for which there’s the most supportive data so far—thanks in part to patients who were looking for their own solution.

McArdle disease is an autosomal recessive genetic disorder based in mutations to the PYGM gene, which cause impaired synthesis of skeletal muscle glycogen phosphorylase. (Individuals heterozygous for the mutation are asymptomatic.) This deficiency of muscle glycogen phosphorylase manifests as a “complete inability to use muscle glycogen stores.” The signs and symptoms are what one might expect in someone whose muscles cannot used stored carbohydrate for fuel: rapid muscle fatigue, myalgia, exercise intolerance, and cramps in exercising muscles. A clinical feature of this condition is dramatically elevated creatine kinase (CK), likely due to skeletal muscle damage as muscle tissue is broken down in an effort to create a local glucose supply.

A common phenomenon of a “second wind” may give these individuals more energy and the ability to resume activity. In the second wind, resting for a few minutes relieves fatigue and myalgia and the affected person can exercise again. This increased or restored stamina “is attributable to an enhanced sympathoadrenal response and to an improved delivery of extramuscular energy substrates, free fatty acids, and glucose to working muscles, which partially compensates for the impaired glycogen breakdown.”

Owing to the impaired breakdown of stored glycogen, the local glucose supply to working muscles is limited, which subsequently limits the availability of pyruvate (which would have been the end product of glycolysis). The limited supply of pyruvate then impairs oxidative phosphorylation, leading to an inadequate supply of substrate for energy generation via the Krebs cycle. This reduced capacity of muscle cells to produce ATP would obviously result in rapid muscle fatigue and exercise intolerance, as McArdle patients experience. Oxygen consumption in McArdle patients is just 35-40% of that in people without the condition, and they also experience a disproportionate increase in heart rate and ventilation during submaximal exercise. (These are both improved during the second wind.)

Clinical trials in which various compounds were supplemented in patients with McArdle disease have been disappointing. Researchers have said, “It is not yet possible to recommend any specific treatment for the condition. However, recent research looking at ketogenic diets for this condition—coupled with a growing number of patient anecdotes—suggest otherwise and offer hope that there may be something to help these patients, and it might be as simple as changing what they eat.

If the debilitating symptoms of McArdle disease result from impaired ability to break down glycogen and use glucose to fuel working muscles, then it makes sense to try and provide muscle cells with alternative fuels, namely, fatty acids and ketones. Glucose is the primary fuel for muscles during high intensity exercise but fat predominates during normal activity at lower intensity. A very-low-carb diet is a sharp contrast to the conventional recommendation for this condition, which is a high-carbohydrate diet with frequent feedings of sugar in order to ensure the muscles have an adequate energy supply. However, researchers increasingly recognize the long-term complications that may arise from excessive simple sugar use and acknowledge the potential efficacy of a low-glycemic index diet, increased dietary fat and very limited simple sugar intake, and propose that medium-chain triglycerides (MCTs) oil or exogenous ketones may be beneficial for some.

There are only a few clinical trials studying ketogenic diets for McArdle disease but the results are encouraging. One case report involves a 55-year-old man with the condition. Following a ketogenic diet resulted in elevated blood levels of the ketone beta-hydroxybutyrate (2-6 mmol/L), and exercise tolerance as much as 10-fold depending on the endurance level. Notably, the subject’s CK decreased from 5,300 to 890 U/L on the ketogenic diet. Before the diet, the subject’s exercise tolerance was just 200m of moderate-exertion walking, 20 steps at medium-exertion on a stepper, and 3km of high-exertion cycling. These improved markedly within just one month on the diet, improved even further at 6 months, and at the one-year mark, he could achieve 12km of walking, 300 steps, and 60km of cycling.

Rather than waiting and hoping for a breakthrough in clinical research, patients with McArdle disease took matters into their own hands and adopted ketogenic diets for self-management of their condition. Members of the Ketosis in McArdle’s Facebook group presented the results of a group survey at a conference at Columbia Medical Center in 2015.

Among those who adhered to keto, results were impressive:

One respondent was the mother of an 11-year-old girl who was wheelchair-bound prior to the keto diet and who no longer needs the assistance. Her CK averaged ~8000 U/L before keto (approx. 40 times the normal level) and averages ~3000 U/L on the diet, including once being measured at 300 U/L. A different subject was a man who was able to participate in rigorous mountain climbing while on a keto diet. Other subjects reported similarly impressive results, with most of them noting a recurrence of fatigue and myalgia while experimenting with higher carbohydrate intakes.

The side-effects reported were not unusual for people on keto diets (e.g., fatigue, headaches, constipation, dizziness). The most common causes for these are electrolyte imbalances, and they are easily remedied by increasing sodium intake. (Some individuals may also benefit from magnesium or potassium supplementation.)

These data are anecdotal, but such evidence shouldn’t be dismissed, especially when results are so striking in a condition for which there are no other known interventions. More recent clinical trials lend increased evidence for keto diets improving subjective symptom relief. Research is expanding into the potential for medium-chain triglyceride (MCT) oil and exogenous ketones to be beneficial in a range of applications, particularly when subjects are unable to adhere to a ketogenic diet. It will be interesting to see if these will be helpful for people with McArdle disease or other glycogen storage diseases.

Despite its celebrated antioxidant content, the reality is, alcohol isn’t a health food. However, consuming alcohol is o...

END_OF_DOCUMENT_TOKEN_TO_BE_REPLACED

Ketogenic diets are effective for helping with a wide array of health issues. Owing to the avalanche of conflicting info...

END_OF_DOCUMENT_TOKEN_TO_BE_REPLACED

In last week’s blog article, we addressed some common myths about ketogenic diets. There’s no shortage of these to discu...