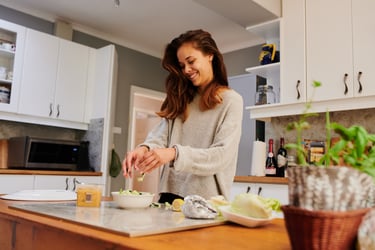 Ketogenic diets are effective for helping with a wide array of health issues. Owing to the avalanche of conflicting information out there about this way of eating, however, it’s possible for patients to hit some roadblocks that prevent them from achieving their goals despite having the best intentions. People use keto diets for a number of reasons, but since weight loss, and type 2 diabetes and metabolic syndrome are near the top of the list, let’s look at the top five most common mistakes people make on their way to better health with keto when these are their goals.

Long before the current keto craze, the low-carb way of eating went by exactly that phrase: low-carb. Emphasizing “keto” may do a disservice to people who are new to this because it adds layers of complexity and confusion to something that is actually quite simple. The driving factor in a ketogenic diet is a very low carbohydrate intake. This is what makes a diet ketogenic, in fact. Nutritional ketosis does not result from any particular “macros” (percentages of calories from fat, protein, and carbohydrate). It results from consuming very little carbohydrate.

The massive popularity of keto has positive and negative aspects. An obvious positive aspect is that more people are learning about this powerful dietary therapy, but a negative outcome is that slick food industry marketing would have people believe they can simply swap out their high-carb favorites for “keto cereal,” “keto granola,” “keto cookies,” and the like, and effortlessly get the results they want. These products can work for some people, but others need to be much stricter with their carb intake and they will not experience the health improvements or weight loss they seek if these relatively high-carb items are regular staples in their diet.

Keto diets go hand-in-hand with the abbreviation “LCHF,” for low-carb, high-fat. This phrase gives equal emphasis to restricting carbs and consuming a large amount of fat, when, as mentioned above, what drives ketosis is the absence of carbs, not the presence of a lot of fat. Ketosis is a fat-burning state; it is not automatically a weight loss state. This is often confusing for those who are new to keto. Ketosis simply means that the body is burning primarily fat (fatty acids) for fuel, rather than glucose. Ketones are produced as a byproduct of oxidizing fat, but oxidizing fat is not the same thing as losing body fat.

If ketones are being generated, then fat is being broken down, but this can be dietary fat or stored body fat. Overconsuming dietary fat leaves the body with no need to tap into its stored fat for fuel. Unnecessary emphasis on hitting a high “fat macro” is a common reason people are led astray in their pursuit of weight loss. Even if carbohydrate intake is very low, excessive fat intake can stand in the way of losing weight. Overdoing butter, cheese, heavy cream, and other concentrated sources of fat is one of the top reasons for slow or stalled weight loss on keto. Just because something is very low in carbs doesn’t mean people can eat an unlimited amount of it and still shed pounds. In fact, it’s possible to gain body fat even while in ketosis if an excessive amount of dietary fat is consumed.

This goes along with the two issues above: when emphasis is placed on achieving a particular ketone level, people may employ tactics that are directly antagonistic to their goals, such as putting butter and oil in their coffee or limiting protein intake. The presence of ketones in the blood, breath, or urine means only that fat is being oxidized; it doesn’t automatically indicate that body fat is being lost. A higher ketone level doesn’t cause weight loss to happen more quickly or to a greater extent. Ketones are the result, not the cause, of fat oxidation.

Reagent test strips for measuring urine ketone levels (acetoacetate) have been available for decades. Newer to the commercial market are meters for measuring ketones in the blood and breath (beta-hydroxybutyrate and acetone, respectively). Seeing an elevated ketone level can confirm that someone is in ketosis and this often provides a little morale boost, since they’ll feel that they’re on the right track. The opposite is also true, however: someone may be doing all the right things but they’ll feel like a failure or be worried that the diet “isn’t working” if their ketone level is relatively low. There’s a simple remedy for this, though: patients just need to be reminded that high ketone levels are not required to be successful with a low-carb diet.

When people are new to keto, there’s an adaptation period while the body adjusts to being without sugar and starch. Some people sail through with no problems, but others experience headaches, muscle cramps, light-headedness, fatigue, and general malaise—a constellation referred to as “keto flu.” The main culprit behind these unpleasant symptoms is inadequate sodium intake. The hormone insulin is often thought of as a “blood sugar hormone,” but it performs a host of other functions in the body, one of which is stimulating renal sodium retention. Owing to the very low carbohydrate intake, keto diets typically lower insulin levels, which means increased sodium excretion, and this rapid shift in electrolytes is believed to be responsible for keto flu.

Since highly salted, high-carb processed foods are off the menu, this sodium has to be replaced through more generous salting of food and beverages or specific inclusion of low-carb foods that are high in sodium, such as olives and cured meats. Physicians who use low-carb diets in their clinics recommend a cup or two of broth made with a bouillon cube as a quick and convenient way to get a lot of sodium for those experiencing headaches and the other transition issues. (As we discussed in a past article, sodium is not the dietary demon it was long made out to be. It’s important for people on ketogenic diets to let go of their fear of sodium unless they must restrict it for medical reasons.) Leg cramps or charley horses are common complaints during the keto adaptation. In cases where increased sodium doesn’t help, magnesium supplementation is typically helpful, and a generous swig of pickle juice or mustard is an effective home remedy as well.

Owing to how powerful keto diets are for a host of health issues, many people newly adopting this way of eating are taking numerous prescription medications, including those for diabetes and hypertension. In some cases, blood sugar and blood pressure begin to improve so rapidly that doses of these medications need to be adjusted or eliminated completely within just a few days of someone starting the diet. Failure to adjust these when necessary can lead to sluggishness, dizziness, fainting, and dangerous hypoglycemia. But don’t blame the diet for what the medications are doing!

If someone experiences signs and symptoms of being over-medicated, that’s evidence that keto is favorably impacting their condition and it’s time to adjust doses or de-prescribe altogether. It’s important that patients on such drugs be educated about this ahead of time so they can look out for signs that their medication is becoming too strong. Most people can “go keto” without medical supervision, but it’s critical that people taking medication for hypertension or diabetes—insulin, especially—be monitored by their physician so they can do so safely.

For more details setting the record straight about keto, see our past articles:

In last week’s blog article, we addressed some common myths about ketogenic diets. There’s no shortage of these to discu...

END_OF_DOCUMENT_TOKEN_TO_BE_REPLACED

You can’t scroll through social media or stand in a supermarket checkout line these days without being inundated with po...