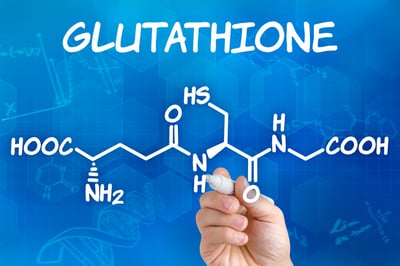 Antioxidants are defined as substances that inhibit oxidation, which left unchecked produces free radicals triggering a number of chain reactions that lead to cellular damage. Luckily, our bodies produce these built-in defense mechanisms, but if mounting reactive oxygen species (ROS) cannot be neutralized (picture a small fire that grows out of control when gassed with oxygen), damage ensues.

To further expound on the fire metaphor, the result of not being able to neutralize the effects of ROS, is damage and, also, inflammation (literally the body is in “flames”). The good news is that there are antioxidants to the rescue, and one such antioxidant is glutathione. Although discovered in 1889, glutathione’s antioxidant activity is a hot topic in today’s research.

This potent compound is a tripeptide derived from cysteine, glutamic acid, and glycine. With its ability to guard against free radicals, glutathione helps to support the immune system. According to Scientific Reports in 2015, glutathione’s ability to work synergistically with peroxiredin and catalase, helps protect cells against hydrogen peroxide. This synergistic formula works against ROS. Glutathione, peroxidredin, and catalase are key components in the growth of cellular homeostasis---an integral part of healthy cells.

Furthermore, glutathione improves the immune system with its significant impact on lymphocyte functions. According to the Department of Immunochemistry, adequate supplementation of glutathione can profoundly enhance immune function. For instance, two randomized placebo-controlled trials showed that treatment of immune-compromised patients with N-acetyl-cysteine (NAC) caused in both cases, a significant increase in all immunological functions that included a total rejuvenation of natural killer cell activity. NAC takes the sulfur from glutathione and connects it to toxic molecules, which then become water-soluble to be excreted from the body.

Another one of glutathione’s benefits is its ability to recycle lipoic acid, and revitalize vitamins C and E into active states by sending electrons to neutralize free radicals. According to a study from PLOS ONE, glutathione impacted individuals with Diabetes Metillus (T2DM) and Mycobacterium tuberculosis.  Typically, these patients with weak immune systems tend to demonstrate greater vulnerability to M. tb infection.  In addition, people with Type 2 Diabetes Metilllus (T2DM), are two to three times more susceptible to TB than those without T2DM. The research also indicated that boosting the levels of glutathione in macrophages isolated from individuals with T2DM resulted in improved control of M.Tb infection. These results show that lower levels of glutathione in individuals with T2DM leads to an increased likelihood of M. tb infection. In addition, according to Dietro Ghezzi from Brighton and Sussex Medical School, oxidative stress can lead to a poor immune system.  Fortunately, glutathione plays a key role in boosting and regulating immunity.  For example, glutathione is important for innate and adaptive functions within the immune system.  This includes T-lymphocyte proliferation, phagocytic activity of polymorphonuclear neutrophils, and dendritic cell functions, which are important to adaptive immunity, because they consist of antigen-presenting cells. Cell-meditated immunity involves protein antigens that are first degraded in the endocytic vesicles of macrophages and dendritic cells, so that the smaller peptides are presented on the cell surface to activate proliferation of antigen-specific T cells. Moreover, glutathione fuels the production of cytokines, and it is needed to uphold interferon-gamma production by dendritic cells, which are instrumental in defending against intracellular pathogens that includes mycobacteria.

NAC, a precursor to glutathione, is a powerful cellular antioxidant used as free radical scavenger antioxidant in its own right. Best known for its role in averting acetaminophen toxicity, NAC has been shown to have many health-related benefits. According to Cell Journal, NAC helps support a healthy inflammatory response, and can positively impact human term and preterm labors. This study concluded that women with previous preterm birth and bacterial vaginosis, 0.6 g of NAC daily was taken orally along with progesterone after week 16 of pregnancy protected against preterm birth recurrence and improved neonatal outcome. In addition, NAC’s beneficial impact on muscle performance was also seen. After three minutes of repetitive contractions, there was a 15% enhanced output, showing NAC to play a key role in improving muscle performance and reducing overall fatigue during labor.

Researchers also found that NAC may positively affect those with polycystic ovarian syndrome (PCOS). PCOS is a common endocrine glands-related disease affecting 5-10% of reproductive-age women. In these patients, there is a higher rate of metabolic syndrome, and NAC helped restore healthy insulin levels and sensitivity.

Antioxidants exert their biological properties with a number of health benefits, which are needed now more than ever with the onslaught of stress, infection and pollution that all contribute to cellular damage. Glutathione and its precursor, NAC, continue to reveal their regal status in the world of antioxidants.

Evidence suggests that diet can significantly alter how the skin responds to sun exposure. The epidermis is a highly reg...

END_OF_DOCUMENT_TOKEN_TO_BE_REPLACED

The Power of Peas

For those celebrating Thanksgiving this week, definitely have your family or friends pass the peas, please. Peas have be...