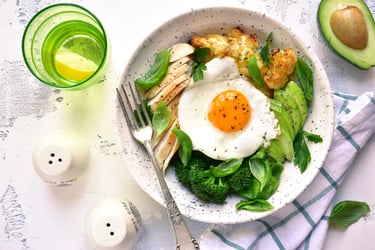 Very low-carb ketogenic diets are commonly used for weight loss and comorbidities associated with insulin resistance. However, as we covered in a past article, evidence is accumulating that carbohydrate restriction can be therapeutic for a number of issues that go far beyond dysregulated blood sugar and insulin. One such issue for which keto hold promise is migraine.

Reports of ketogenic diets reducing frequency and severity of migraines, and in some cases, providing complete remission, are accumulating on social media. But we don’t have to rely on anecdotes. Published case studies are growing in number and several papers explore multiple mechanisms that may explain why this dietary change—and the resulting circulating ketone bodies—appear to be so powerful for correcting brain chemistry. In fact, the first known report of a ketogenic diet (KD) having a favorable impact on migraine was published almost a hundred years ago—in 1928, in the Annals of Internal Medicine. In this study, 9 out of 23 subjects showed improvement, and among subjects who experienced migraine recurrence, three of them had strayed from the diet. Another early paper, this one from 1930 in the Journal of the American Medical Association, corroborates that KDs are highly effective for some migraineurs.

A small study of a KD in patients with refractory chronic migraine showed impressive results that may inspire additional, larger trials. Subjects followed a KD for 3 months and had significant improvements in migraine episode length, frequency, level of pain during each episode, and number of analgesic drugs taken per month. Among 23 subjects, symptomatic days per month decreased from a median of 30 to 7.5. Migraine episode duration decreased from a median of 24 hours to 5.5 hours. Over half the participants had a reduction in the level of pain, and the median number of drugs taken per month decreased from 30 doses to 6 doses.

Interest in using KDs for migraine was piqued among researchers in Italy after twin sisters reported significant reduction in frequency and severity of migraines after following a KD for weight loss. After experiencing as many as six migraines per month, sometimes lasting up to 72 hours and including nausea, vomiting, and sensitivity to sound and light, both sisters experienced disappearance of migraines within days of implementing the diet. Migraines returned during periods of following their habitual higher-carb diet, although even then, frequency, severity and duration were all reported to be reduced. It’s worth noting that while following the KD, these subjects did not eliminate potential dietary triggers such as MSG, aspartame or caffeine. With that in mind, the study authors hypothesized that it was the state of ketosis, itself, that was responsible for the effects: “…we attribute the improvement observed in these patients to ketogenesis, the sole event found to be time-locked to the disappearance (and recurrence) of their migraine attacks.”

These encouraging findings prompted a larger study involving nearly 100 female migraineurs. Compared to subjects following a standard higher-carb diet, those on a very low-calorie KD experienced significant reductions in migraine frequency, duration, and medication doses required.) A more recent study confirmed that a very low-calorie KD (≤ 800 calories/day with a maximum carbohydrate composition of 50g) “is effective for rapid, short-term improvement of migraines in overweight patients,” while a very low-calorie non-ketogenic diet was not (the non-ketogenic diet contained ≥70g carbs per day). This suggests that the state of nutritional ketosis, or possibly the presence of elevated ketones, specifically, has unique effects on brain chemistry affecting migraine susceptibility.

An intriguing case report comes from a physician recounting the experience of his wife, a chronic migraineur who followed a calorie-restricted diet based around low-carbohydrate protein shakes for the purpose of weight loss. She had experienced debilitating headaches since childhood, with no diet or exercise plan providing relief and only limited efficacy from various pharmaceutical drugs. Several times a week she experienced migraines she described as a “throbbing, burning, hot knife sensation in one temple.” The liquid diet resulted in sustained ketosis along with complete remission of migraines. After adhering to the diet for several months, she gradually reincorporated other foods and remained migraine-free even after introducing former trigger foods. It appears, at least in this case, that a ketogenic metabolism not only favorably impacted the abnormalities or imbalances that caused migraines acutely, but being that remission remained even after abandoning the diet, sustained ketosis for some period of time may actually “repair” or permanently correct these underlying causes. The same phenomenon has been reported in the pediatric epilepsy literature: some patients who have remission of seizures while following a ketogenic diet are able to abandon the diet after some period of time and remain seizure-free during adulthood.

As is the case in epilepsy, the exact mechanisms responsible for the observed effects are not known. There are many candidates and it’s possible that some of them work in concert to induce the beneficial effects, and different mechanisms may be at work in different patients depending on their unique triggers. Such possibilities include, but are not limited to, less volatility in blood glucose and insulin levels, decreased glutamate and increased GABA, reduced cortical excitability (potentially raising the threshold for triggering migraine), increased ATP generation and restoration of brain energy metabolism, increased brain-derived neurotrophic factor (BDNF), modulation of sodium and potassium ion channels, and, of course, therapeutic properties of ketone bodies, themselves. (Studies are under way to investigate the effects of exogenous ketones [as beta-hydroxybutyrate] in migraine, as not all patients will be willing or able to adhere to a strict ketogenic diet.)

Apart from mechanisms of the KD that are specific to brain neurochemistry, it’s increasingly acknowledged that there may be metabolic aspects to migraine. Metabolic syndrome and insulin resistance are common among migraineurs, so to the extent that dysregulation of blood glucose and insulin levels are risk factors for migraine, ketogenic diets may help to address these.