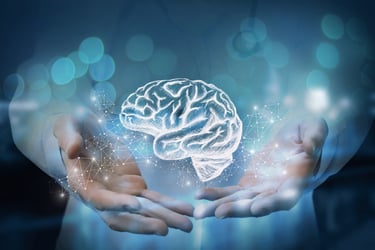 The brain’s metabolism never stops. Even during a coma, the metabolism inside the brain only slows down by 50%. As such, the brain is a very resource-hungry organism that requires a great deal of nutrition and, in turn, creates a lot of metabolic waste.

The brain uses magnesium for hundreds of enzymatic reactions, and deficiencies have been connected to a change in behavior in both humans and animals. Magnesium is also required to help the brain expel metabolic free radicals.

Studies have shown that approximately half of all Americans don’t meet the RDA of magnesium (Mg), which puts them at risk for many health issues. Magnesium plays an important role in nerve transmission and is essential for healthy brain activity. Boosting magnesium stores can have a positive effect in both mood and memory.

Alongside genetic and environmental factors, poor nutrition, in particular low plasma or serum folate, B12 and magnesium, has been attributed to the onset of many psychiatric disorders. Boosting magnesium reserves has a calming effect on the mind, helping with anxiety-related behavior and stress resistance.

Hypomagnesemia (magnesium deficiency) is thought to be a physiological indicator for neurological disorders and has been connected to a wide range of mental health issues. Additionally, boosting magnesium consumption has positive effects in supporting healthy inflammatory pathways associated with neurological health.

N-methyl-D-aspartate (NMDA) receptors contain magnesium, which has a vital protective effect on the receptors and overall brain health. Overstimulation by excitotoxins or other external stimuli can cause brain cells to die prematurely. NMDA receptor function naturally declines with age and contributes to a loss in memory and learning ability.

Magnesium has been shown to help with sleep-related issues that can ultimately lead to other mental health issues. Supplementing with magnesium can prove to be a worthy intervention for elderly patients suffering from sleeplessness. On the flip side, many people who struggle psychologically complain of sleep disturbances. Due to the beneficial effects of magnesium on sleep, supporting magnesium reserves can help restore healthy sleep patterns.

Magnesium is known to some as nature’s “chill pill” due to it helping to the hypothalamic-pituitary adrenal (HPA) axis and helping support a good night’s sleep. The HPA axis is known as the body’s “stress response system” and magnesium co-regulates all of the associated enzymatic reactions. People who report that they suffer from adrenal fatigue are referring to the exhaustion of this system.

When the HPA is activated by corticotropin releasing hormone (CRH) and then synthesized in the paraventricular hypothalamic nucleus (PVN), this releases adrenal corticotropin hormone (ACTH) into the blood. This can bring about a wide array of hormonal and behavior changes in the individual due to the elevated stress response. This stress response depletes the magnesium reserves and triggers an inflammatory response, which can then accentuate mental health issues in some individuals. The CRA-HPA system must be balanced for the brain to work optimally. This can be modulated by adequate dietary magnesium intake.

Although many studies point to increasing our dietary intake of magnesium, it’s often difficult to diagnose magnesium deficiency due to just 1% being present in the blood. The majority of magnesium is stored in bones and organs, making it difficult to measure. So, taking steps to ensure adequate intake is imperative.

Magnesium strengthens the hippocampus to help support long-term memory. Additionally, magnesium is known to give energy and strengthen the synaptic nerve endings in the prefrontal cortex, helping to increase short-term memories.

Magnesium’s great ability to help grow our brains and retain information was proven in an experiment with rats, where the group given magnesium supplementation saw a 100-122% improvement in memory. In addition, boosting magnesium levels may boost cognitive abilities in people with brain synapse function loss and beta-amyloid plaque accumulation.

Being deficient in magnesium can result in abnormal stress responses, which in turn can affect the inflammatory response. This can cause a wide array of health issues ranging from headaches to brain fog. Boosting natural magnesium reserves, especially when under a lot of physical or mental stress, will help to protect the nervous system and support healthy cognitive abilities.