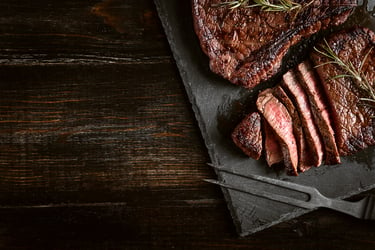 In a population-based prospective cohort study, nearly 500,000 participants in the UK (aged 40-69) were followed over an average of 8 years, during which nearly 3,000 cases of dementia occurred, of which approximately 1000 were classified as Alzheimer’s disease and 500 as vascular dementia. The relationship between meat consumption and cognitive health has had mixed findings in previous studies, which prompted a closer analysis in this larger study. The authors concluded that while unprocessed red meat had a small protective association for all-cause dementia (a 19% lower risk among those consuming 50 g/day), a significant 44% increase in risk was observed with each additional 25 g/day of processed meat.

An additional notable finding was a lack of significance between meat consumption and the APOE ε4 allele. Carriers of this allele had a 350% adjusted increase in risk for all-cause dementia, and over a 600% increased risk for Alzheimer’s dementia, yet carrier status did not have any significant interaction with meat consumption. This lack of an association is important, as other lifestyle factors have clearly been shown to have an interaction with the APOE genotype. For example, sedentary ε4 non-carriers were found to have a 77% increase in risk for Alzheimer’s compared to physically active ones, while being a carrier increased the risk 230% among physically active individuals but 553% among sedentary ones.

Also noteworthy are the limitations of this study; food frequency questionnaires don’t have a high level of accuracy and are prone to recall bias; in this study the authors reported that less than half of participants responded to a more detailed 24-hour assessment. Also, 8 years is a relatively short follow-up, and their use of electronic health record linkages may have missed some cases of dementia. Lastly, although this study completed a multi-variate analysis and adjusted for confounding factors, this type of study is susceptible to the “healthy user bias”; for example, participants eating more processed meat were also more likely to be smokers, less educated, overweight or obese, and eat less fruit and vegetables.

Many mechanisms were suggested to explain the associations found between meat consumption and dementia; processed meat is high in salt as well as nitrites and n-nitroso compounds, and has been previously linked not only to Alzheimer’s disease but also to Parkinson’s disease, type 2 diabetes, and non-alcoholic fatty liver disease, as well as overall mortality. The high protein and/or iron content of red meat may partly explain the small degree of protection observed here, though iron deposition has been observed in different regions of the Alzheimer’s brain, and may play a role in β-amyloid misfolding and impaired cognition. Higher dietary protein intake has been associated with a lower risk of both mild cognitive impairment (MCI) and dementia in an earlier prospective study, and higher carbohydrates with an increase in risk. A recent systematic review concluded that although larger and longer trials are needed, a ketogenic diet shows promise for postponing cognitive decline in Alzheimer’s disease. It may be that in the US Biobank study, a greater consumption of red meat was a proxy for a higher protein and lower refined carbohydrate intake. It is also possible that there are both positive and negative factors in each type of meat; the negative impact of components in the processed meat may just outweigh potential benefits, such as the additional protein.

Growing evidence does suggest that poor glucose control is a risk factor both for mild cognitive impairment as well as dementia. Indeed, an analysis of 28 prospective observational studies and nearly 90,000 participants with type 2 diabetes found a 73% increase in risk for all types of dementia, a 56% increase in risk for Alzheimer’s disease, and a 127% increase in risk for vascular dementia. This association of increased susceptibility has been coined ‘type 3 diabetes,’ with multiple mechanisms which may explain the toxic effects of hyperglycemia and insulin resistance on the brain. This becomes quite important when considering dietary choices to prevent dementia, particularly among patients with metabolic abnormalities; in a comprehensive review of 72 studies, both processed and red meat, as well as total protein, were associated with a greater risk for type 2 diabetes. In contrast, plant protein had an inverse relationship with diabetes, as did yogurt. Although no studies appear to have made the distinction between animal and plant protein when evaluating the risk for dementia, it is worth considering a possible difference in effect, especially for patients with impaired glucose control.

An umbrella review of 20 meta-analyses summarized the current evidence for specific dietary factors on cognitive decline and impairment, as well as all-cause dementia, Alzheimer’s disease, and Parkinson’s disease. The authors found that a moderate level of evidence suggests a benefit for the Mediterranean diet (high in legumes, nuts, vegetables, fish, etc.) as well as fish consumption for Alzheimer’s disease risk, with a 37% and 28% reduction in risk, respectively. Tea consumption was associated with a 26% lower risk for all-cause dementia, and a 31% lower risk for Parkinson’s disease for 2 cups per day.

Our central hub, the brain, is made up of billions of neurons that communicate to other parts of the body in order to ca...