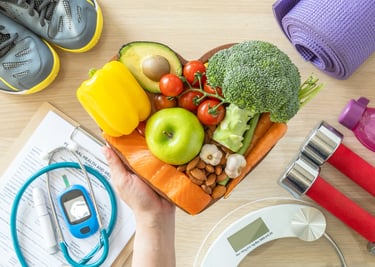 According to data from the 2017–2018 National Health and Nutrition Examination Survey (NHANES), more than 30% of US adults are overweight, and over 42% are living with obesity, including 9% with “severe obesity” (classified as a body mass index ≥ 40). If losing weight and maintaining a healthy weight come down to nothing more than “energy balance” – that is, taking in fewer calories than are expended (whether through deliberate physical activity or simply as the natural result of one’s metabolic rate), then these astonishing figures should prompt observant people to ask a few questions:

A paper recently published in the American Journal of Clinical Nutrition offers a perspective that highlights differences between the oft-cited “eat less, move more,” calorie counting approach to weight loss—called the energy balance model, and the carbohydrate-insulin model, which posits that the hormonal response to food—namely, the insulin response—has a bigger influence on body fat accumulation than does the total amount of food energy consumed. The authors of the perspective include some of the most highly respected and influential researchers and clinicians in the realm of therapeutic carbohydrate restriction and ketogenic diets for obesity, type 2 diabetes, and related cardiometabolic issues.

David Ludwig, MD, lead author of the paper and a pediatric endocrinologist at Harvard Medical School, noted that the perspective presented was not intended to end the controversy, but rather, to “guide constructive debate.” He went on to write that the energy balance model (EBM) is based on a tautology: people gain weight because they take in more energy than they expend. But it offers no explanation for why some people are driven to do this and others are not. Why do so many millions have lifelong battles with weight while others appear to maintain slimness effortlessly? And why are numbers in the former category starting to eclipse those in the latter? Do gluttony and sloth provide a satisfactory explanation, or are there biochemical and physiological reasons for why some people may be driven to eat more and be more sedentary?

It is worth noting that clinicians and laypeople alike have known for nearly 200 years that, at least for some individuals, reducing the amount of carbohydrate consumed, both from simple sugars and complex carbs, seems to facilitate fat loss. (As we explained in a recent article, it’s untrue that low-carb diets are a “fad.”) It’s undeniable that many people who failed at weight loss attempts through strict calorie control or low-fat diets found success through carbohydrate restriction. Proponents of the carbohydrate-insulin model of obesity (CIM) posit that a reduction in insulin levels is a primary factor here, although not the only one. One paper focused on the effects of chronically elevated insulin notes, “When in ketosis, patients are able to lose weight safely, effectively, and relatively quickly.”

While insulin is perhaps most often thought of as a “blood sugar hormone,” it performs a host of other functions affecting numerous tissues and systems totally apart from its effects on lowering the blood glucose. In a way, insulin acts as an energy sensor, suggesting the fed or the fasted state. Elevated insulin suggests the fed state, while lower insulin suggests the fasted state—or, rather, a higher insulin:glucagon ratio is indicative of the fed or postprandial state, while a lower insulin:glucagon ratio is more suggestive of the fasted state. Insulin suppresses lipolysis—the breakdown of stored triglycerides and the release of fatty acids from adipose tissue. In other words, elevated insulin inhibits the burning of body fat. Insulin inhibits lipolysis while facilitating cellular uptake of glucose: in essence, it is a fuel storing hormone. Glucagon, on the other hand, has fuel mobilizing effects: it facilitates release of stored glucose and fatty acids, and also facilitates ketogenesis. So at least in some individuals, keeping this ratio skewed toward lower insulin and higher glucagon—such as is achieved through lower-carb diets with proportionally higher fat and protein—may facilitate fat loss.

In fact, a small study showed that in patients with type 2 diabetes, eating a diet devoid of carbohydrate achieved 71% of the glucose reduction as was seen in complete fasting. Three days of complete fasting resulted in 49% and 69% decreases in glucose and insulin area, respectively. Three days of a calorie-sufficient carbohydrate-free diet resulted decreases of 35% and 48%, so even when adequate calories are consumed, dramatic reductions in blood glucose and insulin can be achieved as long as carbohydrates are kept to a minimum.

Apart from insulin, other hormonal factors and brain signaling effects are incorporated into the CIM. For example, foods higher in protein, fat and fiber may have effects on incretin hormones influencing hunger and satiety that are different from those of high-glycemic or fast-digesting carbs. There’s a great deal of individual variation but it seems clear that some individuals may experience quicker and longer-lasting satiety from foods lower in carbohydrates.

It’s also important to note that the concepts of glycemic index and load, themselves, may be flawed. A study that used continuous glucose monitoring in 800 subjects for a week, encompassing nearly 17,000 meals, found that individual responses to the same foods were radically different. This indicates that glycemic index and load are not fixed values, but rather, may be unique in each person. Study author Eran Segal stated, “There are profound differences between individuals—in some cases individuals have opposite response to one another and this is really a big hole in the literature.” (Opposite responses meaning that a particular food that has very little impact on one person’s blood glucose could have a very dramatic impact on another’s. It would have been especially interesting if insulin responses to meals had also been measured, but that was not part of the study, as home monitoring of insulin is not currently available.) Segal also acknowledged, “After seeing this data I think about the possibility that maybe we’re really conceptually wrong in our thinking about the obesity and diabetes epidemic. The intuition of people is that we know how to treat these conditions and it’s just that people are not listening and are eating out of control—but maybe people are actually compliant but in many cases we were giving them wrong advice ... We can see in the data that the same general recommendations are not always helping people, and my biggest hope is that we can move this boat and steer it in a different direction.” (Emphasis added.)

Perhaps there is more to achieving and maintaining a healthy weight—not to mention healthy blood sugar levels—than simply cutting calories or swapping out high-fat foods for foods that are lower in fat and calories but higher in carbohydrate. The AJCN perspective paper proposes an alternative paradigm and suggests areas for future research—research that’s of critical importance if we are to keep the staggering obesity statistics from getting even higher.