The Synergy of B Vitamins & Omega-3s 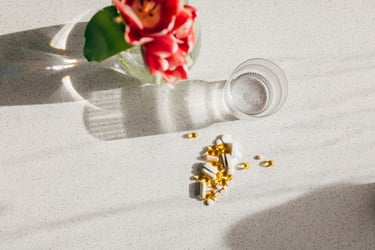 One key to optimizing nutrition is the fact that many nutrients work best in conjunction with other vitamins. A good example of this phenomenon is non-heme iron and vitamin C. For the body to absorb non-heme iron from plant-based foods it requires sufficient amounts of vitamin C.

Another example of combining nutrients for optimal effect is combining B vitamins and omega-3 fatty acids. Studies have shown that brain-healthy B vitamins and heart-healthy omega-3s may actually work better when taken together. B vitamins have been shown to help with cognition in some people, especially vitamins B6 and B12, as well as folate.

While clinical trials on B vitamins and brain health have, at times, produced mixed results, research shows that this may be due to a variation in omega-3 levels.

An international study published by the Universities of Cape Town, Oslo, Oxford, and the UAE showed that higher levels of serum omega-3s may enhance the effectiveness of B vitamins.

B Vitamins & the Brain

B vitamins, when combined with omega-3 supplements, may help improve brain function, such as learning and memory. B vitamins play a role in preserving brain health; however, a significant percentage of the developed world is deficient in at least one of the B vitamins. In the US, 5% of the population tested was found to be deficient in B12 alone.

A 2016 Oxford study focused on the effects of B vitamins and omega-3s in the prevention of cognitive decline. Omega-3 levels of the participants were measured at the start of the study. The research study ran for two years and participants were split into two groups. One group was given B vitamins and the other a placebo. Lead researcher, Dr Abderrahim Oulhaj stated "We found that for people with low levels of Omega-3, the vitamin supplements had little to no effect. But for those with high baseline Omega-3 levels, the B vitamins were very effective in preventing cognitive decline compared to the placebo."

This suggests that one reason people may not respond to vitamin B supplementation may be due to low baseline omega-3 levels. There’s no doubt that nutrition plays a pivotal role in brain health, cognitive decline and the development of dementia. There are many other aspects of health associated with vitamin B6, B12 and folate such as bone health and proper cardiovascular function. For this reason, ensuring that B vitamins are bioavailable by sustaining healthy amounts of omega 3s is essential.

Both brain-derived neurotrophic factor (BDNF) and omega-3 fatty acids have powerful health-promoting effects on the brai...