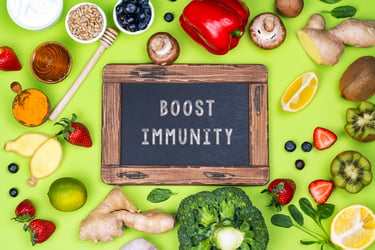 We have all read about the immune powers of certain nutrients over the years, but you may be wondering which are the most powerful, scientifically-backed natural substances for long-term use. Let’s take a look at ten of the top immune-boosting nutraceuticals.

This vitamin is involved in the development of the immune system and plays regulatory roles in cellular immune responses and humoral immune processes. It has demonstrated a beneficial effect in regards to a range of infectious diseases.

The immune organs where most immunocompetent cells proliferate, differentiate, mature, aggregate and respond to immunity need a constant dietary intake to maintain their vitamin A concentrations. Vitamin A is particularly important for the effective function of the innate immune system.

Vitamin C works very well on its own as well as in combination with other immune boosters. In a recent review, its immunomodulatory actions were discussed in the context of a well-known virus that causes respiratory symptoms. These included acting as a free radical fighter, protecting biomolecules such as proteins, lipids and nucleotides from oxidative damage and dysfunction. It also plays a role in supporting normal respiratory defense mechanisms and working as a natural antihistamine to help with flu-like symptoms. Vitamin C has also been found useful for countering the cytokine storm that may occur in certain respiratory situations.

It appears that vitamin C helps support the normal differentiation and proliferation of B- and T-cells, potentially thanks to its gene-regulating effect. Infections significantly impact vitamin C levels due to enhanced inflammation and metabolic requirements, and since deficiency can affect immune function, vitamin C supplementation may be a great ally to optimize cell and tissue levels.

Vitamin D’s effect on innate and adaptive immune response has been extensively analyzed in recent years. This vitamin enhances innate cellular immunity through the stimulation of expression of antimicrobial peptides such as cathelicidin and defensins. Cathelicidin is capable of disrupting the activity of viruses, bacteria and fungi. Defensins maintain tight and gap junctions, adherens, and enhance the expression of anti-oxidative genes. This is important because viruses such as influenza are known to significantly damage the integrity of epithelial tight junctions, increasing the risk of infection and pulmonary edema. Vitamin D is known to maintain the integrity of those junctions.

The support that vitamin D provides is extensive. It also promotes the differentiation of monocytes to macrophages, while increasing superoxide production, phagocytosis and bacterial destruction. It modulates the adaptive immune response by suppressing T helper type-1 cell function and lowering the production of pro-inflammatory cytokines IL-2 and interferon-gamma. This is just the beginning, yet further study is needed to clarify its role in mitigating the severity of infectious conditions such as the common cold. This work is particularly key for communities living in the northern hemisphere, where - in some regions - the mortality rates of certain infectious diseases are higher, matching higher rates of vitamin D deficiency.

Zinc is vital for both the innate and acquired responses to viral infection. Deficiency markedly increases pro-inflammatory cytokines and the unhealthy remodeling of lung tissue in animals. However, what really makes zinc stand out in this list is its dual immunomodulatory and anti-viral properties. Zinc has positive effects on NK cells, phagocytosis, the generation of oxidative burst, and T cells. It helps reduce lymphocyte counts and impairs their function, and has been shown to interfere directly with viral replication and protein synthesis.

Selenium has gained considerable attention thanks to very recent studies on its deficiency status and its connection to infectious diseases in China. Selenium and vitamin E both act on antioxidant pathways to increase the number of T cells at work in the body, to enhance mitogenesis lymphocyte responses and NK cell activity, and increase IL-2 cytokine secretion. Many selenium studies on animals have been published recently, unearthing key information on selenium’s effect on influenza and other viruses. For example, it is thought that selenium status could affect how influenza viruses mutate. Selenium is thought to work on cell-mediated immunity rather than humoral immunity in the case of influenza. It is not well understood how this nutrient acts on viral infections, but in most cases, selenium is a key tool in the fight against them.

N-acetylcysteine (NAC), a precursor to the antioxidant glutathione, has been used to help loosen thick mucus in the lungs for decades, but it is also now widely used to boost the immune system via supporting cell-mediated immunity, a healthy immune response, and battling oxidative stress. These benefits have been supported recently by small trials and interventions, and many are scheduled to provide further data on the benefits of oral and intravenous NAC supplementation in immunity.

Elderberry (Sambucus nigra) is another immune-supportive star. A recent review demonstrated that elderberry extract from fruit and flowers appears to help fight against many microorganisms including some superbugs. The immunomodulatory effects of elderberry include the stimulation of immune systems of the weak and immune-compromised. Case studies also show that elderberry has potential as an ingredient in a hospital disinfectant, and species of Sambucus appear to have very similar properties, including helping to inhibit certain viruses that have come to the attention of the public in recent years.

Epigallocategchin-3-gallate, or EGCg, has been researched in its role to support the immune system, as it may help to combat excessive cytokine production. EGCg is the most abundant component in green tea leaves and is a well-known fighter of free radicals. In addition to antiviral and anti-sepsis actions, an important benefit of EGCg lies in its anti-fibrotic effect and the ability to simultaneously downregulate expression and signaling of inflammatory mediators, as well as to restore the natural immunological homeostasis in many different autoimmune conditions.

Another effective immunomodulator is quercetin, a naturally-occurring dietary flavonoid that has been heralded as a potent aid for the current immunological climate. When combined with vitamin C, quercetin is thought to provide synergistic antiviral, free-radical fighting and immunomodulatory effects.

On its own, quercetin has been found to exert antiproliferative, antioxidative, antibacterial and antiviral effects. One study found that quercetin could help protect patients from complications associated with H1N1 virus infection.

Astragalus has been widely used in traditional Chinese medicine. It has shown immunostimulatory effects and has been used to help patients with a wealth of health issues from the common cold, to chronic hepatitis to sexually transmitted diseases. While antiviral activity has been reported, immunomodulation is the purported mechanism of action, with enhanced immunoglobulin production and the restoration of lost T-cell activity among the significant quoted actions.

In a future blog, we will continue to explore this bountiful category of immune supporting nutrients.

END_OF_DOCUMENT_TOKEN_TO_BE_REPLACED

Key Foods for the Immune System