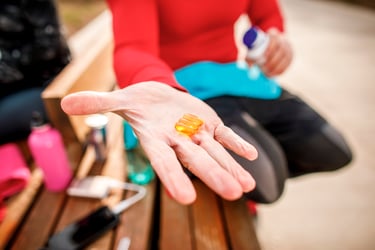 We recently posted a blog that discussed some of the top immune-boosting nutrients. This second list of nutrients is not secondary to the first: It includes five immune boosters well worthy of your attention. As with the first list, these are some of the most powerful, scientifically-backed natural substances for long-term use, yet some have properties that are sometimes underappreciated.

Coenzyme Q10 - also known as CoQ10 or ubiquinone - is a fat-soluble, vitamin-like benzoquinone compound that is naturally synthesized from tyrosine in the human body. Ubiquinol, the fully reduced form of CoQ10, is a strong lipophilic antioxidant, which are highly effective antioxidants that can protect the cell membranes from lipid oxidation. They are so key to health that they are considered to be potential biomarkers in neurodegenerative diseases. (Other examples of lipophilic antioxidants include vitamins A and E, and carotenoids.)

One of the reasons why these powerful antioxidants are all worth mentioning here is because they are thought to help with several age-associated immune deficiencies, resulting in increased levels of interleukin-2, elevated numbers of total lymphocytes and T-cell subsets, and many other activities. They include enhanced mitogen responsiveness, increased killer cell activity, augmented antibody response to antigen stimulation, decreased lipid peroxidation, and decreased prostaglandin synthesis.

CoQ10 is also specifically an excellent tool for regenerating vitamin E, inhibiting lipid peroxidation in membranes, and protecting mitochondrial proteins and DNA from oxidative damage. In fact, it is the only lipophilic free radical fighter that can be novo synthesized by cells and has the enzymatic mechanisms needed to regenerate its reduced form, which is thought to enhance blood plasma CoQ10 status more than ubiquinone.

CoQ10 additionally aids the immune system directly because it plays an essential role in the synthesis of cellular energy in the form of ATP. When endemic immunomodulators such as interferons initiate an immune response in the body, they require large amounts of ATP. As a result, CoQ10 is thought to be potentially useful to enhance interferon action.

As an additional note of interest, when vitamin B6 and CoQ10 are administered together, they have been shown to increase blood levels of CoQ10 even more. They may increase IgG and T4-lymphocytes, which researchers believe could be clinically important for trials on infectious diseases.

Recent studies on polyphenol-rich lentils have shown that they have different groups of phenolic compounds compared with other legumes, including procyanidin and prodelphinidin dimers and trimers, gallate procyanidins, kaempferol derivatives, quercetin glucoside acetate, luteolin derivatives and p-coumaric acid, hydroxybenzoic compounds, protocatechuic, vanillic acid, aldehyde p-hydroxybenzoic, trans-ferulic acid and trans-p-coumaric acid. These phenolic compounds naturally act as antioxidants and have the ability to restrict the formation of reactive oxygen species, which supports the immune system. However, they also restrict superoxide anion by chelating metal ions and inhibiting enzymes. Superoxide anion can promote oxidative reactions by various mechanisms.

This last benefit of lentils has been recognized by other researchers, too, who have compared lentils to superoxide dismutase (SOD), a metalloenzyme and the most effective intracellular antioxidant in all aerobic organisms. SOD1, the type of SOD located in the nuclear and intracellular matrix, has been shown to suppress pro-inflammatory immune responses by protecting against oxidative stress in trials on colitis and IBD.

In the review Innate Immune Cells Speak Manganese, SOD is mentioned again, in the form of manganese-dependent SOD. Manganese is an essential trace element, as well as a component of several metalloenzymes, including SOD, pyruvate carboxylase and arginase, which are important for the innate immune system. It also acts as an enzyme activator.

Manganese is thought to help with the antiviral actions caused by the presence of double-stranded DNA in the cytoplasm, which is the substance that makes up the body of each human cell. Manganese participates in the recognition of this DNA in cells, which is key for the detection of DNA viruses in humans such as smallpox, herpesvirus and causing the expression and mediation of a long list of antiviral activities. Scientists are looking for even more ways that manganese could aid the immune system, just like zinc and calcium have multiple functions in cellular signaling in immune cells and beyond.

Copper is involved in the functions of critical immune cells including T helper cells, B cells, neutrophils, natural killer cells and macrophages. These blood cells help to kill infectious microbes, as well as support cell-mediated immunity and antibody production. Copper has also been seen to also directly kill several infectious viruses on contact, including poliovirus, HIV type 1, and other enveloped and nonenveloped, single-or double-stranded DNA and RNA viruses. Raising plasma copper levels to boost both the innate and adaptive immunity in humans is now discussed openly to help support health worldwide.

Citrus flavonoids, or vitamin P, found in oranges, grapefruit, lemons and other citrus fruits, have been studied by researchers with an interest in their ability to support the inflammatory response as well as their ability to help with the impact of cytokine storms. Recent studies have also shown that flavonoids may bind Angiotensin-converting enzyme 2 (ACE 2), a receptor for particular viral entry.