Recently published in Current Developments in Nutrition, a double-blinded randomized cross-over trial compared the effects of a catechin-rich green te...

7 Health Benefits of Nature to Humans (Backed by Science) 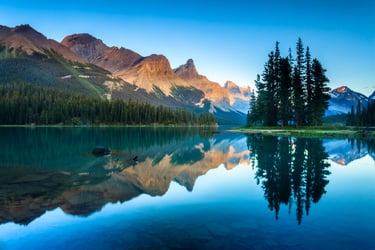 Why is nature so important to human health? Intuitively we’ve always known how good time in nature feels. Recently researchers have exposed the health benefits of time in both green and blue expanses.

Time in nature is officially good for you. Believe it or not, forest bathing is popular in Japan, and in Europe where researchers are diving deep into what they call “Blue Health.”

In this article, we’ll explore some of the science-backed health benefits of nature to humans.

What is Nature in Simple Words?

When referring to nature in this context, we’re talking about the untouched natural environment. Areas that have had little, or no human intervention. Nature is the physical world - brimming with life and filled with motion, including sounds, smells, and sights.

What is “Blue Mind” Science

Being in a “blue mind state” describes feelings of happiness and satisfaction with the present moment -- a state of balance, optimal health, and well being. The blue mind state is felt when we are immersed in water, such as having a bath or swimming in a lake or ocean. A similar state of focus and calm is felt when walking down a beach or through a forest.

There’s a lot of talk about cell phone addiction, the dangers of blue light, over-stimulation, and pollution. The results of this electric energy are referred to as the red mind state. Spending too long indoors on devices and surrounded by man-made objects knocks the body out of balance. According to the American Psychological Association, over 90% of young adults are addicted to continually checking their mobile devices.

In contrast, spending time in nature brings our whole system back into harmony. Author Richard Louv coined the term “nature-deficit disorder” as a way of describing the loss of connection with the natural world. The “red mind state” is the polar opposite of the “blue mind state”. Red is appropriately a color associated with fear and intense emotions. While blue is a color associated with depth and stability.

7 Health Benefits of Nature to Humans

Time in nature, whether by the ocean or in a forest calms the mind. Putting us into a blue mind state, similar to the brainwaves experienced during meditation. Here are seven ways that time in nature can improve health and well being:

1. Lakes and Rivers Flip the Switch

Organizations like the Blue Health 2020 Initiative, are now devoted to how large bodies of water restore health, and for good reason. Modern life has become hectic and overwhelming. Rivers and lakes provide easy access to large bodies of water in urban areas. Simply looking at lakes and rivers can flip your mind from a red mind to a blue mind state.

In one study, published by the University of Exeter, researchers Michael Depledge, and Mat White looked at the effects of observing lakes and rivers. Using photographs, they measured how much greenery impacted the viewers, and found that increasing the amount of water in the pictures produced a favorable response.


A 2016 research study on the effects of nature on health, showed improved concentration and self-esteem in participants. Spending time immersed in nature encourages people to take risks, get creative and rediscover wild spaces. In some children, the symptoms of Attention Deficit Hyperactivity Disorder (ADHD) were reduced as they got better at focusing while spending time in nature.

Water is a massive part of nature. Over 70% of the earth is covered with water. The good news is you don’t need to travel far to reconnect with water. Taking a bath or shower can reset your system. Showering is a great way to escape from the world. All of your senses are involved and external input is temporarily lulled, providing a sense of relief.

If you want to optimize the health benefits of bathing, take a bath. Full-immersion bathing has been proven to improve physical and emotional well being. One study showed that immersion bathing (not shower bathing) increased participants’ scores for fatigue, stress, pain, and mood.

Time spent in nature can boost overall health and well being - both physically and mentally. Exactly how long should you go outside for each day? Scientists from the University of Exeter have found that two hours a week could be the ideal amount of time to spend in nature.

Another huge study of over 290 million people from around the world, published by the University of East Anglia, found that people who spend more time outdoors reported overall good health. Additionally, a Wildlife Trust study in the UK reported that participant’s health status was elevated to “excellent,” after 30 days of making time to “go out in the wild,” an increase of 30%.

5. Long-term Boosts to the Immune System

A Japanese study followed male and female participants who spent 3 days in the forest. This type of forest trip is called  “Shinrinyoku,” and is common practice in Japan. Blood and urine samples were taken to measure levels of urinary adrenaline and Natural killer (NK) cells. Before, during and after their stay in the woods, researchers observed a rise in NK cells that persisted for 30 days after the trip.

Substances released by the trees are thought to be partly responsible for the immune-boosting qualities. Phytoncides are organic compounds with antibacterial properties emitted by trees, which may explain an underlying scientific mechanism on how trees support overall health.

Our Japanese study (above) also showed that levels of adrenaline in the urine of participants was significantly lower on days spent in the forest. This could be due to a combination of factors including lack of overwhelming digital stimulus, potent smells of nature, or increased physical exercise.

Stress is measured both in spikes of adrenaline and also cardiovascular activity. A walk in the forest can have favorable cardiovascular responses, balancing out the whole human organism. Humans have evolved to adapt to their surrounding environment. Natural stimulation via green or blue spaces can enhance both physiological and psychological relaxation.

7. From Gang Members to Leaders

When people feel more connected, they are less likely to become criminals. This theory was put to practice when Juan Martinez was forced to either go to detention or an eco-club. He chose the eco-club, and the rest is history. Martinez is now an environmentalist and head of the Natural Leaders Network.

A 2015 study published in BioScience showed that time in nature correlates with community involvement and a reduction in crime. People who feel more connected to their community and environment are more productive and show more responsible behavior patterns.

Taking time to reconnect with nature may provide a path to both lifelong health and the restoration of our natural habitat. Include at least two hours in nature per week to enjoy many scientifically proven health benefits.

Poor lifestyle choices, including inactivity, reduces the quality of life for millions of Americans. A massive $117 bill...