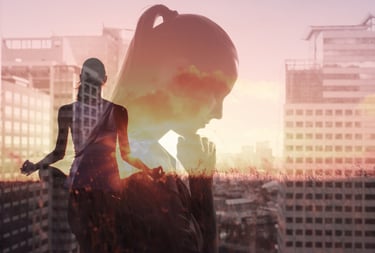 Dualism states that the mind and body are separate and this theory is accepted by many despite much evidence showing an observable bidirectional relationship between the mind and body. For example, the gut microbiome sends signals to the brain, and vice versa. The heart sends signals to the brain and the adrenals are also known to send signals to the brain by way of hormones that can alter our perception of the world. Neuroplasticity has shown us how our environment alters physical make-up. Modern scientists now have very sophisticated tools that can monitor brainwaves, microbes and other factors that change the mind. Stress is clearly a full-body response, and the idea that the mind and body are separate seems an outdated viewpoint.

In this two-part series, we'll explore the science and psychology of the mind-body disconnect, how hormones affect our perception of the world, how stress produces visible changes in the brain as well as enhanced emotionality. In the second part, we’ll explore how stress can actually rewire the brain’s neural architecture, allostasis and the whole-body response to stress, as well as 5 molecules that are required to help rebuild the brain. Let's dive into part one now.

Trauma has been proven to alter the mind. Thankfully the damage caused by trauma can be healed (in many cases) if the extent of the damage isn't too extreme. The brain also has immune cells, a lymphatic system and sophisticated ways of cleansing itself, especially during sleep. Therefore it’s becoming indisputable -  the mind and body are intrinsically connected in many ways. The question remains, where did this flawed thinking of the mind and body being distinctly separate come from in the first place?

There are a lot of ways to look at the mind-body connection. One is that of Dualism and Monism. Philosophical debates on whether the mind is part of the body, or the body is part of the mind, have existed for centuries. Modern science is now proving it’s neither. The mind and body are intricately linked and have a non-linear bidirectional relationship.

Let's step back a second.

People define the “thinking brain” or the conscious part of ourselves as  “the mind” and connect it to the brain. Dualism is born out of the paradigm that the body as merely a physical object, while the mind or consciousness is of another construct. The origin of dualism is a Descartian/Cartesian way of thinking. where they argue that there is a two-way relationship between mental and physical substances. More importantly, it’s a belief that the physical and mental systems are compartmentalized and not inter-related. Descartes suggested that the mind interacted with the body via the pineal gland and that the mind controls the body. Descartes famous statement sums his thoughts up nicely:

"I think therefore I am" ~ Descartes

Monism is a materialistic point of view that states that humans are merely complex physiological organisms. Another type of monism is phenomenalism (or Subjective Idealism) whereby everything is thought to be of the mind. These theories also split the mind and body into two separate camps. Each type of Monism seems to ignore either the mind or the body.

We often describe the body as parts rather than the whole. This works when exploring specific information about how the body works, however, to fully understand the body we must look at the body as a whole integrated organism.

Often biologists argue that there’s no such thing as the mind because it isn't perceivable. This could be viewed as a form of Monism because Monism is the viewpoint that the world is only what we can see feel and touch. Back in the 1940’s, this could have been a valid argument, however, fast forward to 2019 and we have a lot of scientific evidence that is telling us a different story.

Behaviourist’s focus on “external events”, and don’t look at “internal processes” in relation to the mind and mental health. The behaviorist approach only observes stimulus and response - that which can be objectively measured.

The rise of Cognitive Psychology happened when two behaviorists became unsettled by the lack of systematic studies done on the internal workings of the mind.

The cognitive psychological approach revolutionized biology in the 1950s and 1960s, due in part to the work of Piget and Tolman. They believed that both external and internal mental behavior could be monitored scientifically. Cognitive psychologists state:

“The Mediational Processes” are mental events like memory, perception, attention, and problem-solving. The processes between the stimulus and response. Cognitive psychology officially began in 1967 when Ulric Neisser published the book "Cognitive Psychology".

The Cognitive Psychologist believes that the central nervous system (CNS) is comparable to a computer, with the brain as the CPU. They argue that the mind is home to several software programs.

Cognitive psychologists study the mind as though it is an information processor. Focusing on phenomena such as perception, attention, language, memory, thinking, and consciousness. Cognitive psychology begins to delve deeper, while leaving out parts of the puzzle, like the gut-brain-heart connection. Perception, thinking, attention and memory can now be linked to hormones, microbes, the environment, lifestyles, stress, and our diet.

How Hormones Influence the Brain

Over the past 20 years, there have been a lot of scientific advancements in the area of how hormones affect the brain. Hormones like estrogen have been found to structurally alter hippocampal neurons while stress hormones like cortisol can give us a burst of energy. However, long-term activation of cortisol can wear the brain down and kill brain cells.

Symptoms of anxiety are enhanced in the presence of testosterone, while diurnal or nocturnal effects on hormone levels can increase or decrease their production. Hormones have a considerable effect on emotions, the brain, and body, showing a clear mind-body connection.

When someone is suffering from a psychological disorder, whereby the underlying cause is stress, there’s a visible change in the structure of the brain. More specifically, the areas that are responsible for learning and memory - the hippocampus, amygdala, and prefrontal cortex (PFC) can be observed via neuroimaging and seen to structurally change.

Related: Stress, the Good, the Bad, and, the UGLY

Prolonged stress can impair cognitive function and result in enhanced emotionality. The areas of the brain that are altered (due to stress) are also responsible for regulating the stress response in the hypothalamic-pituitary-adrenal axis (HPA). Researchers now use behavioral, morphological, electrophysiological, pharmacological and molecular techniques to analyze the effects of stress on the plasticity mechanisms of the brain. Previously we thought that it was just the hippocampus that was involved in mediating the stress response. But more recently the amygdala and the PFC have been implicated.

Tune in for part 2 of “Stress - The Mind-Body Problem” where we’ll explore how stress can actually rewire the brain’s neural architecture, allostasis and the whole-body response to stress, as well as 5 molecules that are required to help rebuild the brain, and much more.

It is almost an understatement to say that 2020 has been a stressful year. A pandemic, financial worries, and an inflamm...