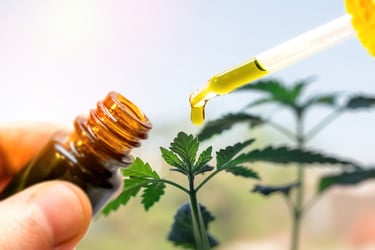 What is all the fuss about cannabinoids? Is it all about cannabis or is there more to the hype? These are common questions, and for good reason. Although cannabinoids were pinpointed thanks to research into cannabis, cannabinoids are proving to be a treasure trove for deep exploration into holistic health and well-being.

In this ultimate guide to cannabinoids - we’ll explore cannabinoids from all angles, including the entourage effect, cannabinoids in breast milk, natural ways to boost cannabinoids, the bliss molecule, labelling accuracy and the ins and outs of the endocannabinoid system, and much more.

Cannabinoids are any chemical substances that bind to the cannabinoid receptors in the central nervous system (CNS) and have been used extensively throughout the world for their medicinal and recreational effects. We now know that there are naturally occurring cannabinoids in the human body called endocannabinoids.

How do you pronounce cannabinoids?

How do cannabinoids work in the human body?

Despite records of the medicinal use of marijuana dating back 4700 years, we didn’t understand how it worked in the human body until 1964 when Yechiel Gaoni and Raphael Mechoulam isolated the main psychoactive component of cannabis - tetrahydrocannabinol (THC). Thanks to these researchers discovering the first cannabinoid, THC, the door was thrown open for further study into how cannabinoids work in the human body.

What are cannabinoid receptors?

CB1 and its splice variant CB1A are densely located in the cerebellum, hippocampus, neocortex, amygdala, and striatum. As such, a wide range of behavioral functions related to emotion, memory, sensory perception, hunger, and motor responsiveness is mediated by CB1 receptors. CB1 is the predominant cannabinoid receptor in the CNS. CB2, on the other hand, is found outside the CNS - in the spleen and hematopoietic cells - making CB2 a modulator of the immune system.

What are cannabinoids responsible for?

The most common form of cannabinoids “CB1” are located in the brain and are responsible for just about every reaction in the body. From the immune system, decision-making and behavior to the dampening of excitatory transmission, the endocannabinoid system is ubiquitous throughout the human organism. It is also closely linked with brain function.

A dysfunction in the endocannabinoid system can have far-reaching implications. An interesting role that the endocannabinoid system plays is in the regulation of hunger. Thanks to the high concentration of CB1 ligands in the hypothalamus, anyone who has tried cannabis will be well aware of the heightened cravings for food, known as “the munchies”. Researchers are, therefore, interested in suppressing hypothalamic CB1s to reduce eating in those suffering from obesity. Cannabinoid receptors also regulate fat metabolism via the liver. Inhibiting cannabinoid function is being studied as a novel anti-obesity solution.

Conversely, the activation of cannabinoids is being studied for the role they play in the dissipation of bad memories in patients with PTSD. Interestingly, genetically-modified mice that do not have CB1 receptors find it harder to forget traumatic events and have a fearful response.

There are 80-100 known cannabinoids

The cannabis plant contains about 480 naturally-occurring chemicals. 80-100 of these chemicals are cannabinoids. There are too many to mention in this article, but here are the main ones to know:

Psychoactive cannabinoids up-regulate dopaminergic neurons. The increased dopamine levels impact the reward centers of the brain and can lead to addiction and abuse of marijuana in some people.

Olivetol is a naturally-occurring organic compound that is found in insects, lichens and the cannabis plant. It is the Olivetol or olivetolic acid (OLA) that has been found to have inhibitory effects on biosynthesis in vivo.

Endocannabinoids are thought to effect the following systems in the human body:

A Czech analytical chemist Lumír Hanuš and his American colleague William Devane discovered the first endocannabinoid in the human brain. They named it anandamide  - “Ananda” is Sanskrit for pleasure, joy and happiness. Anandamide is a little-known naturally occurring neurotransmitter, that we should be paying more attention to.

Prior to the discovery of anandamide, researchers struggled to understand why rats and humans had THC receptors in their brains. In the 1970s-80s scientists discovered the cannabinoid receptors. Receptor molecules bind with neuroactive agents on the cell’s surface, much like a lock and key. The lack of naturally-occurring cannabinoids puzzled researchers for some time. Further research exposed the first two naturally-occurring agonists for cannabinoid receptors arachidonoylethanolamide (anandamide) and 2-arachidonoylglycerol.

These endocannabinoids are released into the human organism to oppose or mediate the unwanted effects of certain disorders, exposing potential clinical uses for ligands that activate cannabinoid receptors.

For some time, people have ignored or underestimated the toxic effects of consuming high quantities of psychoactive marijuana. However, recent findings have exposed Δ9-THC-induced cell death and neuronal damage as well as DNA fragmentation in the hippocampal region of the brain.

Cannabinoids can be found in a wide range of plants, not just marijuana. Here are six foods that contain cannabinoid-like compounds:

Black pepper contains a terpene that is found in cannabis called beta-caryophyllene (BCP). BCP binds to CB2 receptors and is classed as an atypical cannabinoid.

Another culinary staple with cannabinoid-like properties is cinnamon. Cinnamon also contains BCP that has the ability to bind to CB2 receptors.

It’s important to note that not all sunflowers contain cannabinoid-like compounds. You’ll need to track down the Helichrysum, which is native to South Africa. Helichrysum contains Cannabigerol (CBG) called amorfrutins. Amorfrutins are being studied for their ability to regulate metabolic disease.

Echinacea has long been used as a natural approach to boost the immune system. It also contains compounds called N-alkylamides (NAAs). NAAs trigger CB2 receptors and are of significant interest in those using cannabinoid-like compounds to modulate the immune response.

Black truffles are highly prized mushrooms, you can get your hands on some for over $300 a pound. This delicacy is also rich in anandamides, which can stimulate feelings of joy and happiness.

The good news is that you can boost your anandamide levels naturally by eating raw cacao. Cacao contains  N-acylethanolamines (NAEs), which is considered by some to be “the bliss molecule”. It’s important to note the cocoa isn’t the same as cacao. Cocoa has been cooked and processed, which destroys many of the healthy fatty acids in raw cacao.

There are two types of cannabinoid receptors in the human body - CB1 and CB2. CB1 receptors are found throughout the CNS and brain. CB2 is connected with the immune response. The CB1 and CB2 receptors are a natural part of human physiology. However, they can be manipulated by man-made cannabinoids.

What part of the plant produces phytocannabinoids?

Phytocannabinoids are made by plants, hence the prefix “phyto,” which differs from cannabinoids made in the body - suffixed with “endo.” There are currently 70 known phytocannabinoids, both acidic and neutral. A plant will produce non-psychoactive phytochemicals in abundance, such as Δ9-THCA, CBDA, CBGA y, and CBCA.

Are all cannabinoids psychoactive?

It’s important to note that traces of THC have been found in low-quality CBD oil.

Cannabinoids can be extracted from hemp in the form of cannabidiol. However, the quality of the product often doesn’t meet the label claims. For this reason, a reputable supplier of CBD oil should have a certificate of analysis.

In addition to this, at Biotics Research, we ensure that any claims we make on products are analyzed by third-party tests - verifying the quality of our supplements. There are wide discrepancies across the market, which calls for more scrutiny by consumers.

One study published on the JAMA Network looked at eighty-four cannabidiol (CBD) products and found that over 69 percent were inaccurately labeled. Worryingly, some of the products analyzed contained THC, enough to impair a child. Ensuring that you choose purified cannabidiol is of utmost importance.

Related: Not all supplements are created equally

The differences between cannabinoids

Most cannabinoids are fat-soluble - as such, they don’t dissolve in water. However, there are two water-soluble cannabinoids - 1-[(4-morpholino) butyryloxy]-delta 8-tetrahydro-cannabinol (MB-delta 8-THC) and 5'-trimethylammonium (TMA)-delta 8-THC. Cannabinoids are also classified by the receptors that they bind to - ie. CB1 or CB2.

The Entourage Effect is a proposed mechanism that seeks to explain how the psychosis-like effects of THC are mitigated by the presence of cannabidiol. The Entourage Effect was coined in 1999 as a way to explain how chemicals can work synergistically. A wide range of cannabinoids, terpenoids, and flavonoids work together as part of the entourage effect.

Cannabinoids are an exciting area of research with far reaching implications to human health. The discovery of the endocannabinoid system has allowed us to delve deeper into how cannabinoids are ubiquitous throughout the human body. Interest in cannabinoids is growing and new research centers are popping up around the globe, which will allow us to tap into cannabinoids for the purposes of optimizing health.

Taking a Closer Look at Hemp

The interest and use of hemp products have grown exponentially over the past several decades as the understanding of the...

END_OF_DOCUMENT_TOKEN_TO_BE_REPLACED

The holiday season has traditionally come with loads of stress, and now we’re adding the complications of a pandemic to ...

END_OF_DOCUMENT_TOKEN_TO_BE_REPLACED

Hemp and marijuana are both from the same Cannabis sativa plant, but hemp is marijuana’s non-psychoactive cousin mostly ...