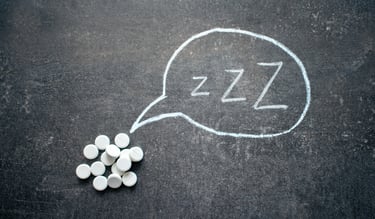 Acute or chronic stress can trigger an overactive sympathetic nervous system, resulting in high oxidative stress. The immune system functions at its best in the parasympathetic state so when it switches to a sympathetic state, the body is vulnerable to disease. Chronic release of hormones such as cortisol, catecholamines and neuropeptides due to stress also has a deleterious effect on the immune system, which impacts the sleep cycle and circadian rhythm. Psychological stress can also have a negative effect on the skin, triggering or exacerbating immune-mediated dermatological disorders.

New scientific discoveries have explored the connection between melatonin and stress. In this article, we’ll review these findings and discuss 4 ways melatonin regulates the stress response.

Melatonin (N-acetyl-5-methoxytryptamine) is a hormone that is released by the pineal gland and the skin. In addition to regulating the sleep-wake cycle, it is intricately linked to the fight or flight response (and digestion). Melatonin plays a role in mitigating stress, as well as controlling the sleep-wake cycle and can, therefore, significantly alter mood.

Melatonin is produced when light hits the retina and subsequently, the pineal gland, which influences the circadian rhythm. It also stimulates γ-aminobutyric acid (GABA) and reduces catecholamine levels.

Melatonin is a methoxyindole produced by the skin and has both receptor-dependent and receptor-independent effects that protect the skin against UV rays and oxidative stress. The skin is the largest bodily organ and has its own innate and adaptive immune system, protecting the body from the stressor of daily toxins.

Because the skin and brain interact through psychoneuroimmunoendocrine mechanisms, there’s a clear connection between stress, psychiatric disorders and skin disorders. In fact, 30% of patients with a skin disorder have a co-occurring psychiatric disorder. Melatonin plays a major role in the stress response of the skin and can counter or buffer stressors to keep the skin intact. Excessive stress can, therefore, appear on the surface of the skin as a dermatological disorder.

Sleep and mood are intrinsically linked. When we’re feeling stressed or worked up it’s difficult to sleep, due in part, to the activation of the HPA axis and the sympathetic nervous system.

Melatonin protects the CNS in a variety of ways. It supports healthy inflammation, shifts the balance of the sympathetic nervous system over to the parasympathetic nervous system and reduces free radical burden while improving cellular and organismal physiology. Melatonin also improves endothelial dysfunction and supports healthy blood pressure levels.

High blood pressure may be the result of an imbalance between the sympathetic and parasympathetic systems and heightened inflammation. Melatonin plays an important role in allostasis, synchronizing daily rhythms as well as regulating parameters of the cardiovascular system.

3. Melatonin is an Antioxidant

Stress shows up physically in the body through the speeding up of the metabolism and the HPA axis, which creates cellular and toxic waste by-products. These waste products create a vicious cycle, adding additional stress to the body.

Melatonin supports healthy inflammation pathways and stimulates various antioxidative enzymes, which increases its efficiency as an antioxidant. Additionally, it potentiates the antioxidant activity of other molecules like glutathione, vitamin E and vitamin C.

Melatonin has a lipophilic effect on cells, which allows it to cross cell membranes and reach subcellular structures. This means that it can successfully scavenge free radicals deep inside the cells. The lipophilic properties of melatonin can also decrease lipid profiles. Administration of melatonin for two months has been found to increase catalase activity, which helps reduce oxidative stress.

Aging and disease can impair the body's ability to produce ATP, the energy molecule of the body. This can be due, in part, to excessive free radical build-up, particularly the superoxide anion, which is a free radical produced by mitochondrial metabolization.

Melatonin has also been shown to support the neurological response, calming the mind and allowing the body to rest.

Melatonin regulates the parasympathetic (fight or flight) and sympathetic (rest and digest) systems. This allows the body to rest and the circadian rhythm to be kept in check. Additionally, melatonin acts on many levels to promote free radical scavenging, which helps the body detoxify acidic cellular waste.