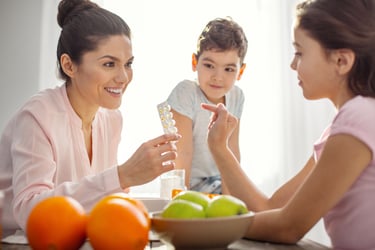 We’ve been hearing on the news a lot about people with “compromised immune systems” being at greater risk of contracting unwelcomed viruses. What does “compromised” actually mean except that you’re more susceptible to getting sick?

The immune system is defined as a complex network of cells, tissues, organs and the substances they make that help the body fight infections and other diseases; it includes white blood cells and organs and tissues of the lymph system, such as the thymus, spleen, tonsils, lymph nodes, lymph vessels and bone marrow.

In this article, we’ll explore what it means to have a strong immune system, how it evolves throughout life, and how to boost your immune system to promote overall health.

What is a Strong Immune System?

A strong immune system has both powerful adaptive and innate immunity; both work together to protect the self from foreign invaders. Living a healthy lifestyle boosts the immune system in many ways that we’ll explore later on in this article.

Typically people between the ages of 10 and 50 will have stronger immune systems when compared with infants and the elderly. Other factors that contribute to having a strong immune system include lower stress and getting a good night’s sleep.

In one study that tracked elderly people in Taiwan, 639 blood samples were taken to measure the levels of self-reactive antibodies, which are antibodies that are capable of fighting your own tissues. Interestingly, the researchers discovered that people with these antibodies seemed to live longer and had a 33% lower chance of dying that year. The downside is that these antibodies are the same ones implicated in autoimmune diseases, such as lupus and rheumatoid arthritis. In either case, however, it validates how important our immune response is to our overall health.

In summary, people who suffer from autoimmune disease are said to have powerful immune systems, which, in one respect appears to provide greater protection from parasites, but may make people more susceptible to other diseases.

The immune system changes over our lifetimes. The seven stages of a man’s life derived from Shakespeare’s As You Like It, paint an interesting picture of life. Each “act” offers different levels of immunity from disease.

"And one man in his time plays many parts, his acts being seven stages." -William Shakespeare

Here are the seven stages of man, as explained by Shakespeare, and how the immune system develops over time:

In some aspects, the immune system of the elderly resembles that of the newborn due to reduced antimicrobial activity by neutrophils and macrophages, and somewhat compromised adaptive lymphocyte responses. Therefore, both the very young and old immune systems are similarly compromised in coping with a typical viral infection. Also, the evolution of the immune system appears to protect the young adult by providing optimal immune responses during procreative years.

What if Your Immune System is Too Strong?

Healthy lifestyle habits cannot make your immune system too strong. Normally immune systems that fight themselves are due to genetic factors in the innate immune system.

An immune system might be considered “weak” due to a person’s age or if someone is health-compromised from a medical issue or if taking medication that lowers the immue response. Also, in situations that can be controlled, poor lifestyle choices, like drinking too much alcohol can result in a weakened immune system.

A blood test can determine how well an immune system is functioning by looking at levels of immunoglobulins, for example, which are proteins that fight infection. The test will also compare your levels of white blood cells and red blood cells to detect any possible weakness in your immune system.

Related: 9 Reasons the Lymphatic System Is the Key to Health

3 Ways to Strengthen Your Immune System

We all know that exercise is good for us. Increased overall fitness can boost the immune system, in turn, fighting off colds and infections. In a year-long study, published in the American Journal of Medicine, researchers found that walking for half an hour a day can cut your chances of getting a cold in half.

Related: 5 Foods to Eat During the Cold & Flu Season

Exercising increases white blood cell count, specifically T-cells that are essential immune-boosting cells. It’s important to note that exercising is a preventative measure. It can be too taxing on your body to exercise when you have an infection. Another study showed that one hour of brisk walking a week can protect you from disability.

The foods that we eat impact our health immensely. To boost your immune system, try incorporating some of these ten immune system boosting foods:

3. Nutrients to Boost the Immune System

END_OF_DOCUMENT_TOKEN_TO_BE_REPLACED

Most of us know that washing hands, getting plenty of rest, getting your vitamin D and eating a diet rich in antioxidant...