How Alcohol Affects the Immune System 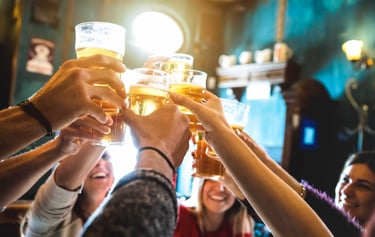 Advanced knowledge into the complex multi-layered interactions of alcohol on the immune system has been exposed in a wide range of research papers over the past decade, concluding that excessive alcohol consumption and misuse can have serious long-term deleterious effects on the immune system. Additionally, a mother who exposes her developing fetus to alcohol puts the baby at risk for fetal alcohol syndrome (FAS) and an impaired immune system that is more susceptible to disease. An adult who drinks to excess puts themselves at risk of contracting pneumonia, as well as a greater likelihood of acute respiratory stress syndrome (ARDS), sepsis, alcoholic liver disease (ALD), and slower recovery from infection, wound healing and trauma.

In this article, we'll explore the underlying mechanisms at play in patients who drink heavily and what effects alcohol misuse has on the immune system.

What is Binge Drinking?

The National Institute on Alcohol Abuse and Alcoholism (NIAAA) defines binge drinking as "a pattern of drinking alcohol that brings blood alcohol concentration (BAC) to 0.08g/dL or above. For a typical adult, this pattern corresponds to consuming 5 or more drinks for men, or 4 or more drinks for women, in about 2 hours.

How Does Binge Drinking Impact the Immune System?

In a research study lead by Gyongyi Szabo, M.D., Ph.D., Professor, and Vice-Chair of Medicine and Associate Dean for Clinical and Translational Sciences at the University of Massachusetts Medical School, 11 healthy men and 14 women were given enough alcohol to raise their blood levels to at least .08g/dL. Researchers found that serum endotoxin levels spiked after binge drinking. They also found bacterial DNA that proved that bacteria had penetrated the gut. One of the researchers, Dr. Szabo said, “We found that a single alcohol binge can elicit an immune response, potentially impacting the health of an otherwise healthy individual.” He went on to say,

“Our observations suggest that an alcohol binge is more dangerous than previously thought.”

Specific subsets of the immune response are thought to reside in different organs such as the liver, lungs, brain, skin, bones, or muscles often making it difficult to pinpoint the underlying mechanisms of how alcohol impacts the immune system. When studying the liver in particular, research has shown that ingesting excessive amounts of alcohol can result in bacterial overgrowth and microbiome dysbiosis. Alcohol can contribute to increased gut permeability and affect the pathogenesis of ALD. This bi-drectional influence is also known as the gut-liver axis.

Alcohol and the Microbiome

The delicate balance of bacteria in the gut is disturbed when alcohol is ingested in excess, even from one single episode of binge drinking - resulting in duodenal erosions, bleeding and mucosal injury in the upper jejunum. Abdominal pain due to bacterial overgrowth in alcoholics may be due to mucosal damage and the resulting bacterial overgrowth that alters the mucosal immune system of the gut.

Related: Your Gut and Your Skin are Connected: Introducing the Gut-Skin Axis

Chronic alcohol use results in substantial changes in the gut microflora that leads to enteric dysbiosis. In animal models, studies have shown that three weeks of alcohol feeding to mice with ALD produced a higher prevalence of aerobic and anaerobic bacteria throughout the gastrointestinal tract. The dysbiosis of the enteric microbiome was partially restored with the treatment of prebiotics. This research means that we must understand the effects that prebiotics can produce in the gut to ensure a balanced and healthy microbiota.

Prebiotics are non-digestible nutrients that promote the growth of intrinsic beneficial gut microbes. Prebiotics feed healthy gut bacteria and alter the body’s ecosystem by promoting anti-inflammatory and neuroprotective activities. Prebiotics have nutritional properties that balance the gut microbiome and create gut-associated lymphoid tissue (GALT). GALT is essential for detoxification and is kept in balance by the fermentation of prebiotics.

Related: Spice Up Your Microbial Health

Prebiotics also promote healthy microbes in the colon microflora. Both prebiotics and probiotics alter the gut microbiota terrain by up-regulating the proliferation of healthy strains of gut bacteria.

Related: Probiotics with a Purpose

Intestinal permeability or leaky gut is prevalent in patients with ALD. In one study 36 non-intoxicated alcoholic patients were given a chromium-51-EDTA (edetic acid) absorption test. Researchers found that the abnormalities in intestinal permeability remained for up to 2 weeks after cessation of drinking. Interestingly the site of permeability was found to be the small bowel, which might explain why alcoholics often suffer from diarrhea.

Intestinal permeability can result from the disruption of tight junction proteins and induce intestinal inflammation. Both ethanol and the oxidative metabolite acetaldehyde play a role in triggering tight junction dysfunction, allowing for the translocation of bacteria from the intestine into the bloodstream. LPS or endotoxins in the plasma of alcoholics is well-known, promoting alcohol-induced liver injury. Gut permeability in patients who misuse alcohol has also been linked to zinc deficiency.